Production Talk is a series of interviews that will give my readers an insightful look into the production methods of some of my favourite big name wizards out there.

This time we have some musical insight from the legendary Hedflux. 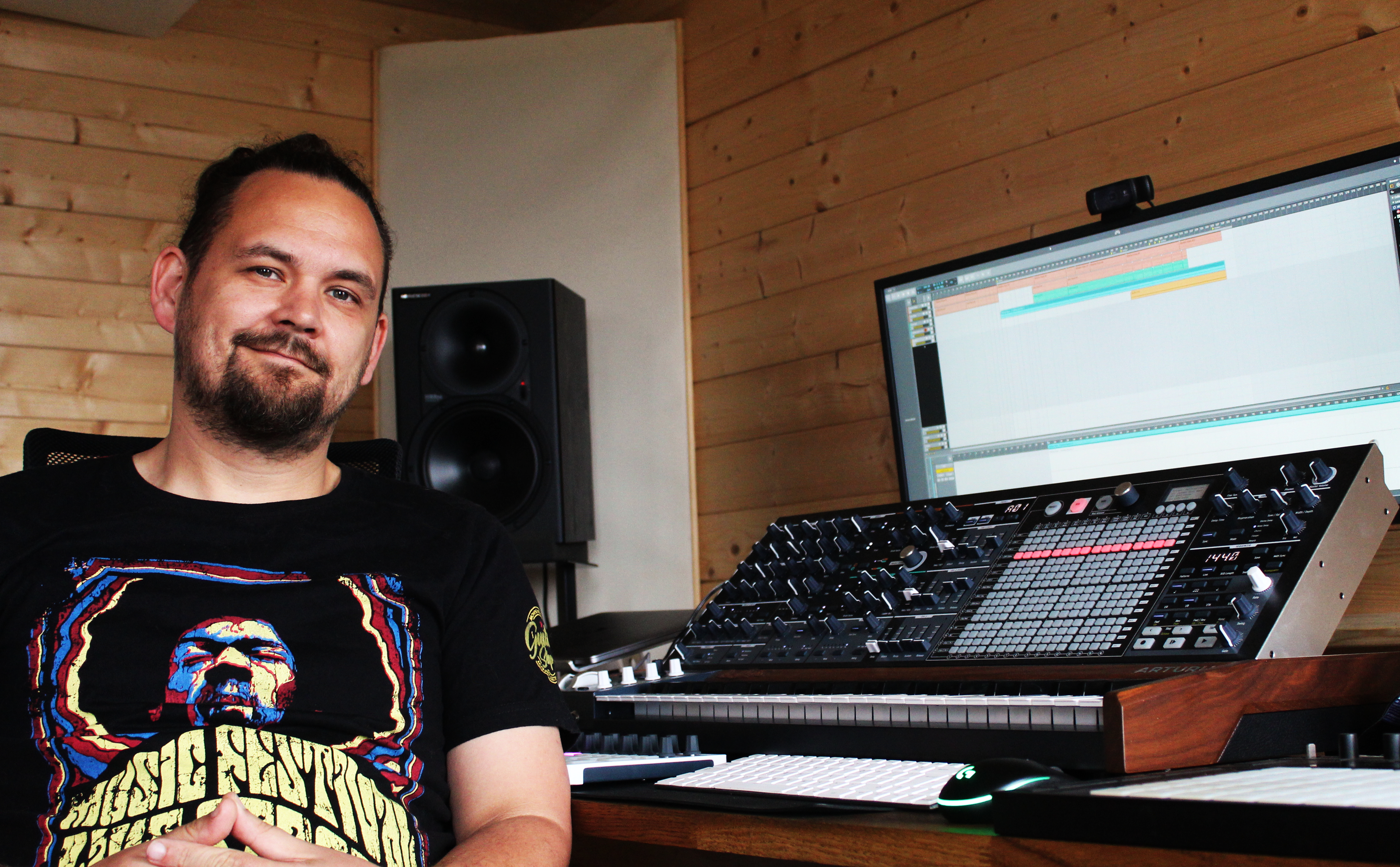 Hedflux is the project of Scottish born Steve Young. Steve has been immersed in music for over twenty years. It began through learning the art of the disk jockey in 1992. Whilst becoming a professor of Quantum Psychics in the early 2000s Steve quite amazingly learnt also how to produce his own unique style of electronic music. Since then Hedflux has become an innovator and master of what has been called “Psybreaks” or “Psychedelic Funk Tech”. A fusion of Breaks, Techno with lashings of Psytrance. Steve has performed all across the world at basically every major event in his field. Hedflux created his own label in 2014 called Luminus Records and also set up the music production school Audio Alchemy in Hawaii. A well as being an enormously influential producer and teacher, he is well known across the land to be a seriously decent dude.

Here is some suggested listening for as you read  :–)

1) How long have you been producing music?

I learned basics of piano when I was quite young and had synthesizers growing up, started collecting vinyl and mixing records around age 10, started producing computer music with an Amiga around 1991, just using tracker software to make 8bit computer game style music.
I studied mathematics and physics at university, and got a PhD in theoretical physics. This was quite useful to my understanding of music, since it’s all based on vibration, numbers, waves and probability theory. I got to understand quite deeply how musical rhythm and proportion is in everything, from the structure of atoms to the motion of the stars.

2) Which Daw do you use and did you use any others before what you are using now?

I got a PC in 1996 and started working on Cubase, then around 2003 I got into Ableton. I’ve also been closely following Bitwig over the years and the new version 3 is absolutely amazing, a fully modular Ableton style environment with pristine sound quality, definitely worth a peek!

3) Regardless of genre can you tell us some of your most inspiring influences that had a profound effect on your vision of music and also what elements of their music catch your attention and why.

I was DJing breaks and drum & bass throughout the 90s, then around 2004 got into the psychedelic genre and received a lot of inspiration from that, so I wanted to carve out a niche between psytrance and psychill. There were a bunch of other artists who had done work in this area; Seb Taylor (Kaya Project, Hibernation, Shakta, Digitalis) was the real pioneer, in terms of breaking the mould of the trance genre, introducing breakbeats to psytrance in the 90s – back then they called it Break-trance, and I first caught sound of it through his Digitalis project on Sinister records. There was also FarTooLoud in the days when Dom Smart was in it, they were doing more like heavy breaks with really twisted psytrance style editing and leads and a really ecstatic energy. Also a guy called Rex, also on Sinister Records who kinda disappeared from the scene about 10-12 years ago, but made some of the coolest psybreaks ever!
I would get inspiration from many music acts, both underground and mainstream, however it was these guys who stood out to me as representing the style I wanted to pursue.

4) Do you believe the quality of sound from using hardware synthesisers is superior to software plugins? Please detail your reasons behind your answer.

Not necessarily. They are different of course, but each can be made to sound good or bad depending on who is using it. With analogue synths we are physically mixing electrical waves together inside of physical objects, but with digital we are adding/multiplying numbers together on a chip. The former happens in real-time, whereas the latter comes with an unavoidable delay/latency, and the waves are only approximated with a step function, and there are certain calculable limitations which you don’t have in analogue. But this doesn’t make it worse, just more quantized (which comes with additional creative benefits not possible with analogue). The digital wave is converted to an analogue signal before being fed to the speaker, so the quality of the DA converter, how it interpolates the data into a smooth wave, is a very important part of the whole setup.

I recently got an Arturia Matrix Brute, and started building a modular synth. Both are lots of fun, and able to produce sounds and modulations that I could never make with my computer and they are getting me into whole new ways of thinking about music. The Brute makes a great studio centre piece, with it’s CV outs for linking to the modular, and the onboard sequencer is amazing for generating interesting musical patterns with ease.
These tools are awesome, but it takes a lot of time to play with them and learn them, and they are in no way essential to producing music. They’re more of a luxury item.

6) What are your favourite software plugins and why? (These can include stock plugins from your DAW.)

I find myself going back to Serum again and again, it’s very transparent and highly functional, if I have a particular sound in mind I need to make, usually i’ll go to Serum to do it. I use most of the Ableton stock plugins, as well as Sonarworks for room correction (highly recommended). But undoubtedly the most impressive thing I’ve tried recently is Bitwig 3.0 – i can barely put it down!

I was PC until about 2014, then I bought a mac. The great thing was, I was able to dispose of an entire cupboard of cables, cases, boxes and computer components I had been hoarding for years “just in case” I needed them to repair my PC.   My main motivation for switching was just stability and minimalism. More stable, less stuff.

8) What are your techniques for starting a song and turning your ideas into a cohesive story?

I’ll start by designing a set of instruments; drums, bass, percussion, leads, pad, FX etc. Then i’ll jam with those for a while, using my controllers/synths, until some good ideas starts to emerge. Then i’ll take stock of all my ideas, separate the good from the not-so-good, then arrange it into simple musical structure (intro – first drop – mid section – breakdown – section drop – outro)   Then once it’s arranged I spend a lot of time refining it, smoothing the transitions, adding little tricks and details and automation. Once i’m happy with the content, i’ll do a final mixdown then i’m done.

9) What would you say are the essential methods to mixing to create clean and dance floor worthy premasters?

Making sure the kick and snare are popping through the mix consistently each and every time, that the low end fundamental is strong and clean, that all other elements are appropriately low-cut and side-chained. Making sure your hi hats and other high frequency details are coming through crisp and clear, often we have these too low in the mix while we are working because they are white noise. There is usually some muddiness or boxiness in the mid-range of most peoples mixes, because essentially everyone is making music inside a box, so taking care to ensure everything is cleaned up in that region, and sounds aren’t conflicting. Often we have multiple sounds playing at once, when only one is necessary. Be ruthless in reducing clutter.

10) Is their something within music production that you believe you have a particular talent for and can you give some insight to help share this with others?

I don’t believe i have any special talents, I just do what everyone else does; make beats on a computer. Anyone can do it given enough time and persistence. You only need to be able to count to 4 😉
I think it is taste, rather than talent, that gives our music the quality it has. Our taste is being constantly refined based on knowledge and experience of the world. Making music that satisfies the ever expanding horizon of our taste, that is the challenge.

11) Can you please detail some freaky sound design tip or tips that perhaps our readers haven’t thought of trying before. This can be anything you like.

Try creating a return channel with a sync’d delay going into a tuned comb filter (e.g. OhmyGod, or the one in Serum FX) going into a randomised glitch sequencer such as Glitch 2 or Effectrix, Beat Repeat (or all of the above) – then when you send even a tiny moment of audio to that Return channel, turn up the feedback and you’ll get a nice trippy, tuned, glitchy sequence going off. You can expand on this, automate them, re-order the plugins and take it as far as you can imagine.

12) What would you consider to be essential career advice to any young producer trying to get ahead in the modern world.

Stay humble, remain teachable, life is a school and every day a new lesson. There are many surprises along the way but if you persistently work on improving your art and your comprehension of reality, doors will open that you didn’t even know existed.

13)  What are your dream studio items or setup that you haven’t got yet or maybe could never afford.

I recently got word that Element 5 are making some new studio monitors and have been using my music in the testing and development process, so I’m quite excited to check those out!

I think there’s two sides to this. When you make music for a job, you have a client whose approval you require, so it makes sense for you to create the music that the client wants. When it comes to our personal art, that we do for our growth and transformation, it should always be as true and authentic as you can make it.

15)  Can you suggest some listening material to help open the minds of our readers and introduce something new that can inspire them.

16)  A final motivational word from you to the aspiring producer

I hope you enjoyed this production talk interview with the most awesome Hedflux. Is a pleasure for me to gain insight on such an inspirational artist. Stay tuned for more production talks with some of my favourites. Whilst your here I recommend you have a browse through my website. I have many other blogs to help producers on there journey to greatness. I also have information on my Ableton lessons and courses, high quality sample packs and a link to my Youtube channel with heaps of free power knowledge.  If your interested in studying with me, we can do it online or in Madrid, in my home studio. Take care folks and keeps musicing.

The How and What of Being a Successful Music Producer

Ultimate Strategies – How To Finish a Track?!

A Philosophy – The Structure of Electronic Music

A Simple and Practical Guide to Gain Staging.